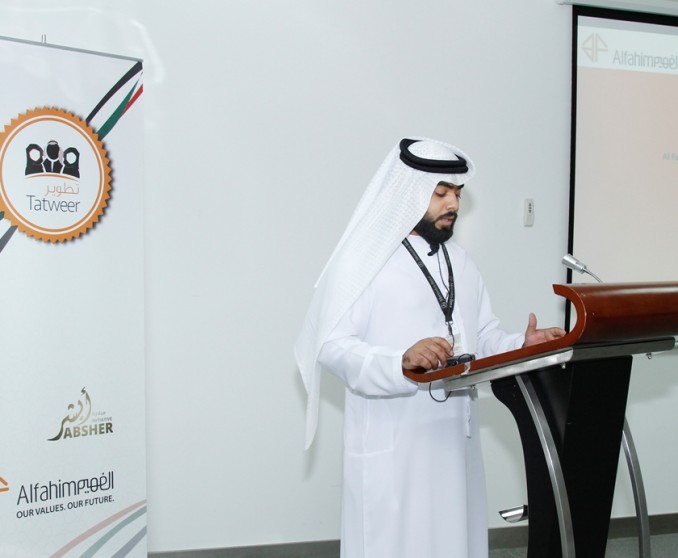 Al Fahim Group has announced that another 20 UAE Nationals have joined its Tatweer training program in 2017. The program is entering its fourth year after a hugely successful debut in 2013 and is proving popular amongst young Emirati women making up over two-thirds of the total number of newcomers.

The Tatweer program is a 12-month curriculum to provide UAE national employees with departmental and functional knowledge to enable them to develop the appropriate business skills and competencies they require to excel.

Trainees will undergo a thorough three-phase orientation, which will eventually see them placed into a full-time role in a department within the business suiting their profile and skills.

Chairman of Al Fahim Group, Ahmed Abdul Jalil Al Fahim, stated, “Speaking as an Emirati citizen, I believe it is vital for Al Fahim Group to endorse Emirati youth and support their growth.

“By providing guidance and the right platform for UAE nationals to thrive and excel, we are contributing to the overall growth of sustainable economy and the development of the UAE. Emiratization is a national goal and we are committed to supporting the development of UAE nationals in reaching key leadership positions in the corporate and private sectors,” Al Fahim continued.

“Our philosophy in running such a program that harnesses skills and competencies of Emiratis will enable them to be highly successful members of society, be it in Al Fahim Group, or any other organization should they choose a different path.”

Moath Hussein, Chief Support Services Officer of Al Fahim Group, explained further saying “All trainees underwent an induction to the program and the business in December. This month, they start the second phase where each of them undergoes a rotation program in different business units with the aim of giving them a feel for the nature of our business and in getting them acquainted with various managers across the organization.”

In the third and final phase trainees will be assigned to business units based on job matching criteria that include personal profile, ability to perform a role, and business recommendations, while also being paired with a training “buddy” who will be responsible for ensuring their training needs are met.

One happy recruit hired in 2013, Huda Almarzooqi – Senior Call Center Agent and a proud mother of four, talked about her career path in Al Fahim Group saying, “Every year I took a step up in my career. I started as a receptionist, and after seeing how customers were happy to deal with me, management moved me to become a call center agent in the Marketing & Communications Department. This year, I was promoted to Senior Call Center Agent. My favorite part of my day is working with customers where I receive around 120 interactions per month.”

Another Emirati employee, Sadeq A. Saeed, joined Al Fahim Group’s flagship company, Emirates Motor Company (EMC), in 2013 as a sales consultant. During this period, he has grown to be one of organization’s top performing sales consultants while also successfully fulfilling his military duties.

Since returning from his military obligations, Saeed is eager to continue growing with the organization, commenting “I would like to thank the Abu Dhabi Tawteen Council (ADTC) for their continuous efforts and support to further my career by placing me in this engaged and dynamic organization. I look forward to picking back up my career from when I left, in what will hopefully be a long and promising career at Al Fahim Group.”

As one of Abu Dhabi’s oldest and proudest businesses, the Al Fahim Group has launched dozens of UAE Nationals’ careers in line with the government’s Absher Initiative in the last three years and took this commitment to a new level when it introduced the Tatweer program last year.

The Abu Dhabi Council for resettlement praised the Al Fahim Group for the Tatweer program in its first year describing it as an important model of a family business that wishes to assume national responsibility towards the employment of emirates.