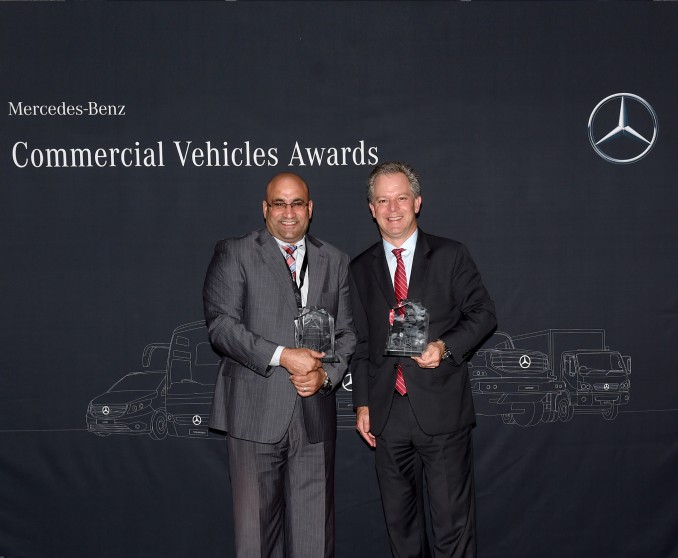 Held at the Steinberger Hotel in Dubai, the ceremony was organized by Daimler Commercial Vehicles MENA FZE to honor its general distributors for their outstanding performance in the past year. The event marked the first award night of its kind in the region after the foundation of Daimler’s regional office in Dubai in October 2015.

The Network Award 2016 and Best New Business of the Year 2016 titles were two of the eight categories contested amongst the Mercedes-Benz distributors in ten MENA countries – Lebanon, Jordan, Iraq, Kuwait, Bahrain, Qatar, KSA, Oman, Pakistan and the UAE. EMC was awarded the two key titles at the Mercedes-Benz Commercial Vehicles Regional Award Night for its successful business concept and clear understanding of the market in which it operates.

Roland Schneider, President & CEO of Daimler Commercial Vehicles MENA: “With the first ever ‘Mercedes-Benz Commercial Vehicles Awards MENA’, we are truly recognizing and appreciating the efforts and remarkable achievements of our authorized General Distributors in the year 2016.

“The winners have shown outstanding performances and thus have significantly contributed to the success of Mercedes-Benz Trucks, Vans and Buses in the MENA region in the past year.”

The EMC facility in Abu Dhabi consolidates its business relationship with Mercedes-Benz and helps cater to the growing consumer base in the region.

Bilal AlRibi, General Manager – Emirates Motor Company, Commercial Vehicles said: “EMC had set some bold and challenging strategic goals for the year and as a team, we made impressive progress towards achieving them. These awards recognize that the EMC family has exceeded its targets and will continue to excel within the industry.”

EMC serves a premium client segment in the region, including dignitaries, the UAE government, oil companies and the business community. The company is constantly involved in community-driven activities that include social, environmental, charity and sports efforts.