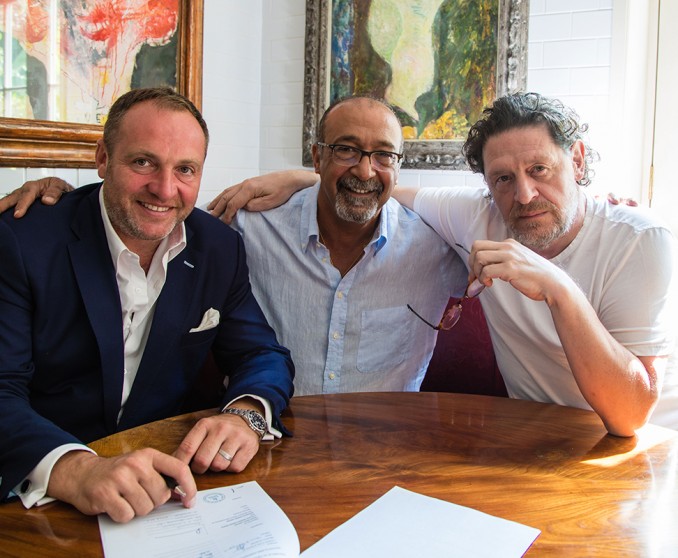 As Marco looks to open his 50th restaurant in the UK, through his Black and White Hospitality business, the new division will now promote Pierre White’s franchised restaurants in the UAE market, and beyond.

News of the deal will be closely followed by the opening of the first two venues both of which are in Abu Dhabi. This will include a Marco Pierre White Steakhouse Bar & Grill at the end of 2018 and a New York Italian, which is expected to open in March 2019.

Jihad Hazzan, Chief Operating Officer (COO) of ALFAHIM Hospitality, and Elias Madbak, Managing Director of RMAL Hospitality, the restaurant arm of the ALFAHIM Group, will now work closely with the newly formed business to expand further the group’s worldwide appeal, which currently has seven brands within its portfolio.

Jihad Hazzan, COO of ALFAHIM Hospitality said: “I have known Marco Pierre White for years and he is widely regarded as the Godfather of Modern Cooking, is hugely respected and is one of the most globally recognised names in the catering sector. After our successful expansion into the UAE, we’re now looking forward to developing partnerships for other regions.

“Black and White Hospitality has a very strong portfolio and its business model of aligning the restaurant brands with hotels is one that has proved very successful in the UK.

“The Black and White team is also hugely experienced and very enthusiastic with some working overseas already, which means we now have an amazing mix to take the offer global,” concluded Mr Hazzan.

Black and White Hospitality is approaching the opening of its fiftieth venue in the UK and is keen to expand further.

Speaking on the partnership Nick Taplin, Chairman and CEO of Black and White Hospitality said: “Not only is he well-known because of his success as a chef and restauranteur, Marco’s international presence has grown further following appearances on TV shows such as Master Chef Asia, Master Chef Australia and also Hell’s Kitchen Australia.

“It therefore makes sense for us to expand our reach outside of the UK where the potential is almost limitless. To be at the start of a journey as exciting as this makes me very proud and gives me the opportunity to take the MPW franchise model onto a truly global platform.

“RMAL Hospitality has a strong track record within the restaurant and hospitality sector and we’re delighted to launch this exciting new division of Black and White Hospitality. With two venues already in the pipeline and Marco having just opened The English House in Singapore, we’ll be looking to build our international presence with hoteliers, owners and other hospitality management businesses” concluded Mr Taplin.

Marco Pierre White added: “I like creating good food, great environments with good service. This is a hugely exciting opportunity and will allow us to extend our philosophy of selling a good night out right across the globe. It will certainly mean a lot more air travel for me in the future!”