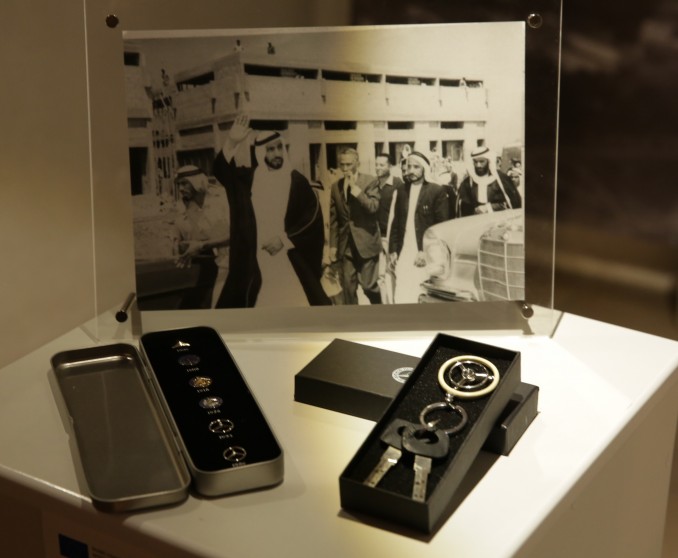 Emirates Motor Company (EMC), Mercedes-Benz authorized distributor in the Emirate of Abu Dhabi and the flagship company of ALFAHIM Group, is an honorable sponsor and partner in the high-level Europe and Sheikh Zayed Exhibition taking place in the Fall of 2018.

His Excellency Mohammed Abdul Jalil Al Fahim, Supervisory Board Member of Al Fahim and Chairman of Al Fahim Family Council, has graciously shared the legacy of the late Sheikh Zayed (mercy upon him) through personal and historic stories, and will be displaying rare antiques owned by the Founding Father and inherited by the Al Fahim family in the grand exhibition in Abu Dhabi later this year.

A teaser event was held on May 9th, Europe Day, in the presence of His Highness UAE Minister of State and Guest of Honor HE Zaki Nusseibeh and EU Ambassador to the UAE HE Patrizio Fondi, in addition to Ambassadors of EU Member States and other countries accredited to the UAE, government officials, Emirati and European photographers, artists, poets and EU partners .. Al Fahim’s corner won the hearts of many visitors seeing that the late Sheikh Zayed’s old car keys to one of his S600 Mercedes Pullmans dating back to 1962 – 67.

Quote by HE on the importance of highlighting the relationship between Sheikh Zayed and Europe in the upcoming exhibition.

“When Sheikh Zayed took rein of Abu Dhabi in 1966, he worked 20 hours a day to build roads, schools and a multi-departmental government. He, literally, started from zero taking him three years from 1966 to 1969 for the nation to rise. In those three years, everybody, including many European expats, contributed to the development of Abu Dhabi. We needed a lot of people to help us... We needed engineers, teachers and doctors. We needed to build houses for the influx of people coming to help the country grow. We needed materials and cars. You name it, we needed it,” said Mohammed Abdul Jalil Al Fahim.

“Abu Dhabi became like a workshop. You saw cranes, trucks, bulldozers everywhere working day and night. ALFAHIM participated in this advancement by building roads, hotels, residential apartments and housing for expatriates. The group also assisted in laying cables, lighting the streets and importing motor cars and other related franchises,” he said.

On the long history with Mercedes-benz, HE said: “UAE’s relationship with Germany’s leading automotive brand, Mercedes-benz, dates back 56 years bringing us to the state of excellence we are at today, following the beacon of the founding fathers of our nation.  To continue progressing with the country and further strengthening our relations with Germany, we had to raise the bar higher and take new challenges. We had to think big with foresight like our forefathers. Hence, we created the largest Mercedes-Benz facility in the world spanning a record total area of one million square feet”.